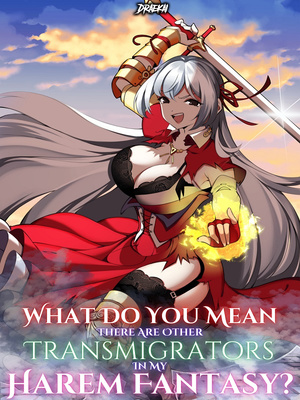 Chapter 196 It’s A Crazy Idea
Chapter 195 Curtain Fall For The Sirens
Chapter 194 Did You Pack Earplugs?
Chapter 193 Another Cave

You’re Reading What Do You Mean There Are Other Transmigrators In My Harem Fantasy? Novel at ReadNovelDaily.

In the most cliched fashion, a giant truck-kun smashed into my World, killing everyone with it.

And in the next most cliched event, I was given a second chance in life by the gods to live another life in a world of swords, magic and dragons! It’s literally a dream come true!

Be a hero? Who has the time?! Conquer the world? Like hell I’ll do something so troublesome! Diving into dungeons, exploring ancient ruins and meeting all the weirdos of the world? Sign me right up!!

I’m only interested in travelling the world to find the most interesting materials I can use to write the best story I can! I’ll show you my creativity and dazzle this new world with the stories I’ll write!

I’ll fight with dragons, swim with krakens, wrestle giants, eat all the cakes and bed the beauties! Time to live this life however I want!

A psycho is running around the world saying that they are the hero who will slay the demon lord? Why is there such a crazy person?

There’s someone out there threatening the world with nukes? How did they even find out how to make those?

Some crazy hobo is going into other people’s houses to smash pots to look for money? That guy really must be crazy.

Chapter 1 The Giant Truck-Kun
Chapter 2 Character Creator
Chapter 3 First Night Out
Chapter 4 Considering My Situation
Chapter 5 Time To Hit The Books
Chapter 6 Mother
Chapter 7 Start Of Training
Chapter 8 Hunting Time
Chapter 9 Getting Better
Chapter 10 Who Changed My Difficulty Settings?
Chapter 11 Magic!
Chapter 12 Mother Brought Sweets
Chapter 13 A Late Night Peek (*RR)
Chapter 14 The ’System’ Is Here!
Chapter 15 Testing Out My Magic
Chapter 16 Magic Lessons
Chapter 17 Time To Grind
Chapter 18 Wolf Hunting
Chapter 19 You’re Not Alpha Enough
Chapter 20 By The Way, I’m Not A Male
Chapter 21 The First Proper Boss Fight
Chapter 22 Slayer Of Goblins
Chapter 23 You Can Call Me The Shadow Monarch
Chapter 24 This Skill Is Quite The Cheat
Chapter 25 The First Meeting With Another Transmigrator
Chapter 26 She Is So Cool
Chapter 27 Claiming The Spoils
Chapter 28 I Grew Again
Chapter 29 My First Dungeon!
Chapter 30 Falling Into A Trap
Follow this page Read Novel Daily on Facebook to discuss and get the latest notifications about new novels