The Yandere System in the World of Cultivation 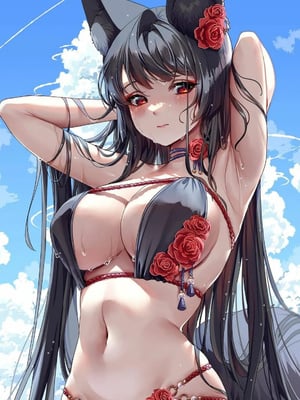 The Yandere System in the World of Cultivation

You’re Reading The Yandere System in the World of Cultivation Novel at ReadNovelDaily.

In his first life, Victor was lazy, poor, and the ultimate gambler, but the Goddess of Envy gave him a chance.

[ Die and go back four years into the past to restart your life. ]

Victor lost all hope and killed himself, and so began his second and also the most miserable life.

He became rich and successful but soon his girlfriend betrayed him and took away all his fortune, having decided on a desperate act Victor came up with a plan to avenge himself.

Although his plan was successfully executed, Victor hoped that this time he would die once for all and forget the despair that followed him through his two lifetimes.

Yet as if to deny him of his salvation, he suddenly heard a feminine voice once again, but a different one this time.

[ Goddess of Lust, surprised by your actions, grants you a gift ]

It was a turning point for Victor.

From now on whether it is a Goddess, a Vampire or a Succubus, no matter who it is I must seduce you or I will surely die this time!

Chapter 1 The Goddess Of Envy Is Stunned!
Chapter 2 The Turning Point
Chapter 3 My Wedding Gift To You!
Chapter 4 Died With A Smile On His Face!
Chapter 5 What Did I Do Wrong?
Chapter 6 The Dark Goblin King
Chapter 7 The Happiness Of Being Human!
Chapter 8 System Intervention
Chapter 9 The Snow Queen Mu Bing Yun
Chapter 10 I Want To Break Off Our Engagement!
Chapter 11 Is He Really My Father?
Chapter 12 Meeting My Ex-Mother-In-Law?
Chapter 13 The Tempting Chu Yuechan
Chapter 14 Invitation
Chapter 15 "Yandere" Means Trouble
Chapter 16 The Dual Cultivator
Chapter 17 Mercenary Number One
Chapter 18 I’ll Go With You
Chapter 19 The Gods Are Watching You!
Chapter 20 What’s Wrong With This Demigod?
Chapter 21 Mikena Wants More... (R18)
Chapter 22 Punishing The Demigod (R18)
Chapter 23 A Mother’s Love
Chapter 24 Mikena’s Thoughts (R18)
Chapter 25 Quest Accomplished! (R18)
Chapter 26 Instincts Cry Out For Danger
Chapter 27 I Swear! I Didn’t Do Anything To Her
Chapter 28 Different Gazes
Chapter 29 To Cultivate I Must Take Risks
Chapter 30 I Want To Join A Sect
Follow this page Read Novel Daily on Facebook to discuss and get the latest notifications about new novels