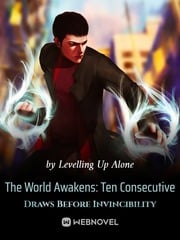 It was the year 2040. Chen Feng woke up and the world became a massive virtual reality game. A time rip had occurred in North America, Europe, Asia, and throughout the world. Monsters streamed through the rip.

The time of the awakening was here and everyone had to go through ten random draws at the beginning.

Chen Feng, who had been rebirthed into the game was very lucky and started the game with ten SSS-class talents.

[Lucky Halo] The Goddess of Luck will watch over you.

[Elemental Compatability] Compatible with all elements in the system. He can learn any skill of any element.

[Treasure Sensing] He can clearly locate where the treasures are and their grades.

[Super Tamer] He has no limit as to the number and grade of beasts he can tame.

[Super Synthesizer] He can synthesize all skills, objects, and living things.

[Power Trove] There is no limit to his attack range and his attack speed increased by 100 times. [Topsy Turvey] He can turn negative effects into positive effects and save those forever.

[Talent Stealer] Your talent is great, and it is now mine. He can kill his opponents to get their talents.

[Passive Increase] Stop using active skills during a designated period and his passive skills will increase a hundredfold.

[God of Tricks] God said, let there be light, and there was light. The skills you create will become real as long as enough people believe in it.

The people were awakened on the day of the game and Chen Feng became a god-like existence.