Follow this page https://facebook.com/ReadNovelDaily on Facebook to discuss and get the latest notifications about new novels.
Novel Psychological

The Substitute Madam Amazes the World Once More 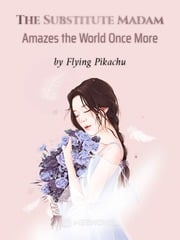 The Substitute Madam Amazes the World Once More

You’re Reading The Substitute Madam Amazes the World Once More Novel at ReadNovelDaily.

Mo Zhu’s mother remarried after her father went missing, and she had lived in the countryside with her elderly grandmother ever since. The girl who had no parents wanted to protect herself. Therefore, to avoid getting bullied, she had turned wild since she was a child—she played truant, fought, and drank. There was nothing she did not know how to do. She was a problematic student in the eyes of her teachers, a big sister in the eyes of her classmates, and a hooligan in the eyes of her acquaintances.

When she was eighteen, her birth mother retrieved her to live at her stepfather’s house. Everyone in the village claimed that she was going to live a happy life in the city, that her mother had not forgotten that she had a daughter here. “Mo Zhu, the Huo family is one of the most powerful families in the country. It’s your good fortune to replace your younger sister in marrying into the Huo family. You have to cherish this opportunity,” explained her mother patiently as she held Mo Zhu’s hand. Mo Zhu’s eyes were filled with sorrow. At that instant, she knew why her mother thought of her. Inviting her over to the city to enjoy life was simply a figment of her imagination—she was simply an exploitable piece of trash that her mother could sacrifice.

The Eldest Young Master of the Huo family fell severely ill recently. He did not just develop a twisted personality, but also became violent and cruel. His face had been completely ruined and he had only two years left to live. Mo Zhu’s younger sister was supposed to be Eldest Young Master Huo’s fiancée, but the ruined young master was no longer a suitable match. Fearing the Huo family’s influences, her mother did not dare to cancel the marriage, thus she sent Mo Zhu under the bus to protect her younger sister. However, was Mo Zhu truly just a useless simpleton who knew how to smoke, drink, and fight? No! That was simply a disguise she used for self-defense since she was a girl without parents.

After marrying into the Huo family, she stopped smoking, drinking, and fighting. She became the best daughter-in-law a mother-in-law could ever have; the best wife a husband could ever have. What never occurred to anyone was she no longer flunked in her studies. In fact, she transformed into a straight-A student. Half a year later, she enrolled in the best university in the country and majored in specialized medicine. Determined to become an excellent doctor, she cured her husband’s illness completely in merely two years. That handsome and suave Eldest Young Master Huo returned.

After Huo Xuan’s recovery, he allocated a huge budget and held the biggest wedding of the century for Mo Zhu. During the grand wedding ceremony, Huo Xuan announced during his speech, “In this lifetime, there are two people I’m most grateful for other than my parents. One of them is my mother-in-law. Thank you for despising me after I fell ill and forcing my wife to marry me in her younger sister’s stead. If it weren’t for you, I wouldn’t have met the most important person in my life! The second person must be my wife! She never despised me when I was at my lowest. Instead, she takes good care of me. She’s an angel sent by God, and she has saved me with her forgiveness and kindness, granting me a second chance at life.”