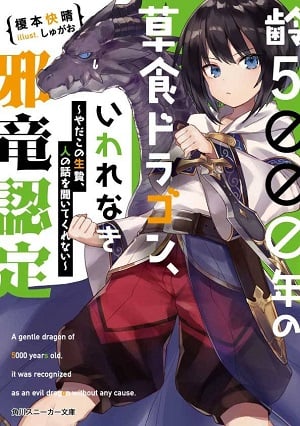 Saying 5000 year-old-dragon has an impressive ring to it, yet that dragon was an extremely harmless, herbivorous being. However, because of his uselessly giant figure and scary appearance, he was mistaken for the Demon King’s executive and provided by the nearby village with a sacrificial maiden.

Fundamentally cowardly and timid dragon tried to send her away, but the extremely enthusiastic sacrifice didn’t want to give up. Inevitably, he lied: “Okay, I just ate a small portion of your soul, so you can go back already”, but the maiden with outrageous assumptions has misunderstood that she became the dragon’s kin.

Then, out of all things, she began to manifest strange power on the basis of her wrong assumptions – in turn, the helpless dragon, by some mistake started a rebellion against the Demon King.

Rebellion or whatnot, he wasn’t even his subordinate in the first place.

Chapter 1 — Sacrificial maiden tries to be eaten by any means necessary
Chapter 2 — Sacrificial maiden is scarier than the Demon King
Chapter 3 — Now to the adventurer’s town
Chapter 4 — It seems like “Evil Dragon Rēvendia” is my name. First time hearing it
Chapter 5 — Where should I leave this child
Chapter 6 — I think I’ll have trust issues
Chapter 7 — Troublesome pursuer
Chapter 8 — To the endlessly stretching grasslands
Chapter 9 — A pitiful elephant — and other matters
Chapter 10 — Let’s reminiscence at night
Chapter 11 — Interlude — Raiotto’s training ~today I’m also (half—forced) lively~
Chapter 12 — Rēko Kidnapped
Chapter 13 — Individuality is wonderful (when one knows their bounds)
Chapter 14 — Unforeseen circumstances
Chapter 15 — Even further below the underground ruins
Chapter 16 — God of Hunt
Chapter 17 — A kindred spirit can be found anywhere
Chapter 18 — A useless present
Chapter 19 — Town protected by the Water Saintess
Chapter 20 — Lady Saintess on the run
Chapter 21 — I got lost
Chapter 22 — Lady Saintess, for eternity
Chapter 23 — Educational guidance
Chapter 24 — As kin
Chapter 25 — A far more terrifying person
Chapter 26 — The true aim
Chapter 27 — What exactly is Lady Saintess?
Chapter 28 — A sorrowful splash of water
Chapter 29 — The fall of Lady Saintess
Chapter 30 — Lady Saintess returning to the past