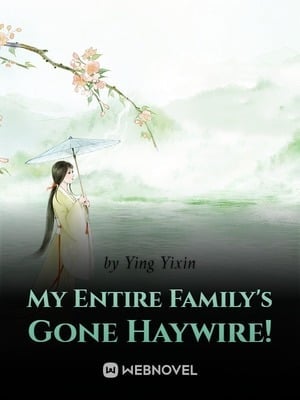 “After Gu Xin recovered from her illness, she realized that her whole family had changed.

His father who was a gambling addict that once almost sold his wife and daughter, also often picked fights after getting drunk. That same father now said that he would not gamble anymore. He wanted to pick up his textbooks and take part in the imperial examinations to give the three of them a happy life.

Her mother who was not just efficient, but also detailed and thorough in her work, spent her days holed up in the house, not daring to try anything adventurous. She did not even dare to light a fire and was only fierce to her daughter. That same mother was now suddenly carrying a chopper and facing off debt collectors.

Her embroidery was outstanding and she was cold to others, her sister, who never cooked, no longer held the needles. She smiled more and took over all the work in the kitchen.

Gu Xin felt that she was dreaming. Apart from the changes in her parents and sister, after she saved a fish, those who scolded her would fall and those who had bad intentions toward her would be unlucky. If she wanted to eat something, living things would come to her door and knock their heads against her door. Even if they were not living things, she could still find them by coincidence.

Everything was so wonderful!

Of course, it would be great if the young master of the Zhou Family in town did not go crazy.

The young master of the Zhou family said that her parents would sell her and her sister would harm her in the future. The young master wanted to take her far away and escape from the Devil’s Den.

Mother Gu, “Get lost, you rascal. I’m a strong woman who owns a big business empire. It’s not easy for me to have a daughter. Can I bear to do that?”

Sister Gu, “Scumbag male protagonist, don’t think that I don’t know how much of a scumbag you are in your book and how you will hurt my Xiao Xinxin. Pfft!”

Young Master Zhou, “How is it different from my previous life? However, no matter how different it is, I won’t miss my Xinxin in this life.”

Gu Xin, “Have you asked for my opinion?”