I Am A Gourmet: Just Eight And You Want Me To Start A Roadside Stall? 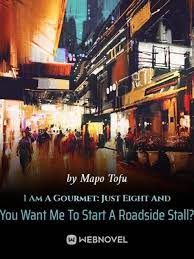 I Am A Gourmet: Just Eight And You Want Me To Start A Roadside Stall?

You’re Reading I Am A Gourmet: Just Eight And You Want Me To Start A Roadside Stall? Novel at ReadNovelDaily.

Xu Le transmigrated to a parallel universe into the body of an adorable eight-year-old. Here, there are no delicacies.

His parents went abroad, leaving him behind to earn his own keep.

His parents said, “Son, it is time you become a man and become financially independent. Make your own money and bring up your younger sister.”

Xu Le, “I understand, but at least pay off the mortgage before you leave!”

Forced by his circumstances, elementary school student Xu Le shouldered a burden that was beyond his age.

He begins his life of paying off the mortgage, bringing along his younger sister, Xu Tian, along for the ride.

Just then, the “Culinary God” system was awakened.

He could get all sorts of prizes if he cooked delicious food for people to try.

As such, a food stall started to appear on a busy street. In it was a tiny figure as a cook and a long line of customers.