After Transmigrating, The Fat Wife Made A Comeback! 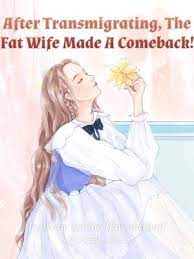 After Transmigrating, The Fat Wife Made A Comeback!

Please Let Me Have The Buff

You’re Reading After Transmigrating, The Fat Wife Made A Comeback! Novel at ReadNovelDaily.

Qiao Mei transmigrated into a novel as a supporting character with the same name as her who lacked presence. This supporting character was a country bumpkin who couldn’t get married due to her obesity. According to the original script, this country girl Qiao Mei was a fatty spoiled by her grandfather. However, their relatives were all vicious and cruel people. Her grandfather had poor health, so once he died, the relatives would divide and swallow up his assets. Hence, her grandfather’s greatest wish was to marry Qiao Mei off. For this, even sacrificed and betrayed his good friend’s grandson, Xia Zhe. Grandpa got Xia Zhe drunk and had Qiao Mei forcibly take the strong and handsome Xia Zhe with her body which weighed more than two hundred pounds. Then, grandpa would catch them the next day and force Xia Zhe to marry Qiao Mei. However, that eventually caused the start of Qiao Mei’s unfortunate life.

Also, in the original story, Qiao Mei took possession of Xia Zhe’s mysterious jade. But due to Qiao Mei’s stupidity, her cousin’s sister had tricked Qiao Mei into giving her the jade, which resulted in the cousin’s family becoming rich. When Qiao Mei transmigrated here, it was during the awkward moment when she was making love to the man after making him drunk. She woke up groggily the next day and grandpa’s team had already appeared at the door. Qiao Mei was frightened. She didn’t want to proceed on the original path and marry a man who didn’t love her. And so, she lied and chased grandpa away. She also pushed the man out before forcing herself to look at her tanned and chubby reflection in the mirror! Alas, she cried at her ugly appearance…

Like a sumo wrestler in large cloth underwear, even the plus-sized apparel shops didn’t have clothes in her size. And her face was the size of a pizza, a scorched pizza! Qiao Mei decided to reform her life! The first step, lose weight! The second step, clean up her room! She used to be particular about cleanliness, and although her current house had a huge courtyard, she could only describe it as messy! The third step was to hold onto the jade tightly so her greedy cousin wouldn’t stand a chance! Only, wasn’t the tall and handsome Xia Zhe supposed to hate her according to the original story? Why was he being nicer and nicer to her?